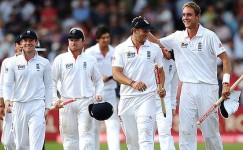 Australia ($1.60) has opened their shortest price of the Ashes series to win the fifth Test against England ($4.50) at the SCG starting on Friday.

The hosts have a stunning record at the SCG, winning nine of their past 10 Tests at the venue. Their only loss in that period was at the hands of England in 2011.

A series clean sweep for Australia looks almost inevitable, a result that opened $81 in August.

“It has been a long and sometimes nervous wait for the punter who had $400 @ $51 back in October on an Aussie 5-0 series result,” said TAB’s Matt Jenkins.

“There would have been some anxious moments when the Aussies drifted to $4.75 on the third day as England started to build a lead after lunch.”

Nathan Lyon’s five-wicket haul swung the match back to the home team who started the fourth day $1.14 to win the Boxing Day Test.