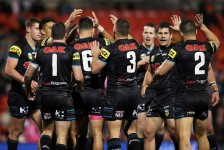 A surge of support for the Penrith Panthers has seen them firm into outright second favouritism behind hosts New Zealand to win next month’s Auckland Nines.

Punters have supported the Panthers from $11 into $7 with online bookmaker Sportingbet, which puts the club just behind the Warriors at $6.

“Punters have been steadily chipping away at the Panthers since the start of the year and if the money continues they could easily start the tournament as the favourite,” Sportingbet’s Andrew Brown said.

“They’ve got the right players to light up the tournament and if their backline fires they will be the team to beat,” Brown said.

Wests Tigers are $9 third favourites ahead of Gold Coast at $11, with Brisbane, Canberra and Souths all at $13.