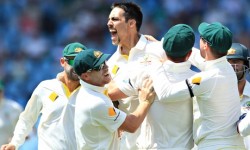 Mitchell Johnson’s devastating new ball spell and figures of 4 for 51 on day two of the 1st test against South Africa enticed punters to back Australia into heavy odds-on favourites to take a 1-0 series lead.

“The money had been coming in 4 to 1 in South Africa’s favour before the test started but clearly Johnson’s ability to turn a match on its head was underestimated,” Sportingbet’s Andrew Brown said.

“The punters are now well and truly back in Australia’s corner and there’s been strong support for them to win the 1st test and then go on and take the series.”

Sportingbet has opened its market for top Aussie run scorer in the 2nd Innings and Michael Clarke is a $4 favourite in front of David Warner at $6.