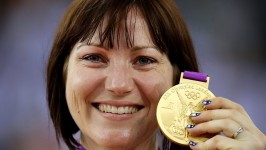 Meares is priced at $2.39 for both events, while fierce rival Victoria Pendleton is by far her biggest threat, opened on the second line of betting at $3.08 and $5.95 for the respective events.

Sportsbet.com.au has also installed Meares and her Australian teammates as joint $2.99 favourites with Germany for gold in the Women’s Team print.

Australia is on the second line of betting at $4.95 in the Women’s Team Keirin, behind firm favourite Great Britain ($1.29).