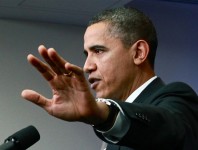 A punter with online bookmaker sportsbet.com.au thinks Barack Obama will be re-elected when the US go to the polls in November after wagering $10,000 on the incumbent.

Obama, who has now attracted three times the money compared to his biggest rival Mitt Romney ($2.60), has firmed into $1.45 to win the election.

“It seems the consensus amongst the punters is that he will hold off Mitt Romney and be back for his second and final term.”